Alfred and Ella Porter purchased the Inn in 1902. It then became the Porter House or sometimes called Hotel Porter.

Alfred Porter was the son of Alexander and Elizabeth Porter, who moved to the Old Mission Peninsula in 2853 and lived very close to where the Inn stands today. They resided in a farmhouse, which was located on the corner of Center and Old Mission Road. The building no longer exists. Alfred Porter was born in that farmhouse on November 4, 1857. He married Ella K. Johnson, daughter of Captain Frederick L. Johnson, also from the Old Mission Peninsula. She was born August 16, 1860.

Bothe Alfred and Ella Porter were prominent citizens of their community. In addition to running the Inn, Alfred also served as township clerk for eight years, school assessor, highway commissioner and was connected with the Traverse City Lodge No. 323, Benevolent and Protective Order of Elks. Ella Porter also served as the switchboard operator for the Old Mission Citizens Telephone Company, from 1906 to 1926, which was located in what is now the kitchen here at the Inn.

The Porters were blessed with three children, Charles, Lovisa and Minnie.

We were very fortunate to have been visited by the Porter's granddaughter (Minnie's daughter), Suzanna Reicha, her son Charles, and his wife Voula during the summer of 2000. It was a very enlightening visit. Suzanna, 82 at the time, told of how she used to work at the Inn when she was just 10 years old. We toured the building, and she spoke of how she remembered different things about the Inn. She recalled no plumbing or electricity, just gas lanterns and chamber pots in the rooms used as toilets. She also mentioned two outhouses in back of the Inn - one 5 stall and one six stall. We later excavated where they were and a large collection of artifacts were recovered and on display. She told us it was her duty every morning to empty the chamber pots and bring buckets of hot water to the rooms where the guests would freshen themselves with the pitcher and bowls filled with lavender water.  We want to express a tremendous gratitude to her for gracing us with several photographs of her family, the building, and a look at the past as she had experienced it here at the Inn. We are forever grateful to her. With her help we were able to recreate her memory with actual antiques from that period. 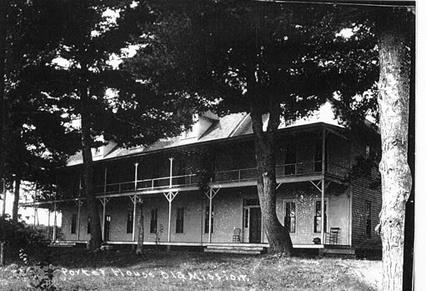 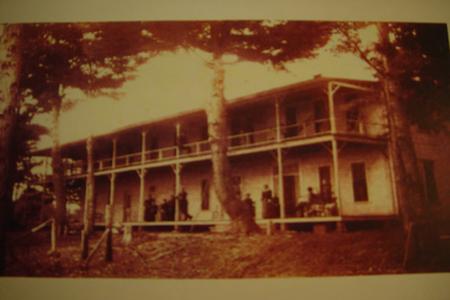 Adult Only Get Away 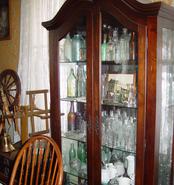 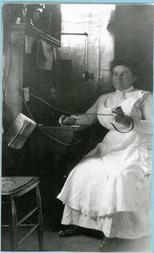 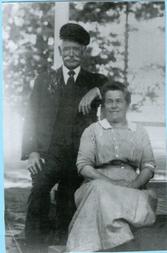 The Nevingers came to Old Mission in 1945 from Illinois. Norman Nevinger worked for R.L. Donnelly as a print master. He bought the Inn for his wife, Doris. That is when the Old Mission Inn got it's present name. Norman brought his family to Old Mission in the summers and spent the winters in Illinois. Then eventually moved to Old Mission permanently. The Nevingers had 4 children, Norman Jr. Lynette, who moved from Illinois, and Mark and Alice, who were born in Old Mission. Norman Sr. had a seaplane business and would fly back and forth from Chicago to Michigan once a month, while Doris ran the Inn. The Nevingers had matchbooks made up that said: "Horseback riding, seaplane rides, private beach and lawn games. Stop in for a piece of homemade cherry pie." Rooms were $5.00 a night. They also ran a restaurant and a campground.

Alice, Mark and Lynn donated many pictures and shared their stories of growing up at the Inn, which helps us to carry on their legacy of their ownership.

I would like to express a special thank you to Tamara Nevinger (the Nevinger's granddaughter) for a special collection of old pictures and love letters written to the Porter's daughter, Lovisa, that were dated 1902, months before her passing. She found them in an old truck in our third story that dated back to the mid 1800's.

Mark Nevinger also has been a big help in our quest ot re-open the restaurant. He gave us an old menu that showed what kind of food the restaurant used to serve. The prices were a lot cheaper back then. A hamburger cost 40 cents, a hot dog was 30 cents, and a full Porterhouse steak dinner was $5.00 and that included a piece of cherry pie. An old brochure talked of seaplane rides for $3.00, and horseback riding was included in the price of the rooms.

We also found some old newspaper ads for the Inn and restaurant. We decided that when we re-open it we will call it the Mission Bay Café.

Mark was also helpful by telling us about what it was like for him growing up as an innkeeper's son. The trees were a lot smaller back then.

The Nevingers operated the Inn for 53 years. They then sold the property in 1998 when they split the Inn from the campground, which was located across the street from the Inn. The campground was ten torn down and had been sold to 2 developers from South Lyon, Michigan and was going to build 10 large, luxury homes. Many campers were saddened by the loss of the campground because it was the only campground on the Old Mission Peninsula.

Fortunately, after 17 years of sitting on pins and needles and worrying about the development, Michigan's Department of Natural Resources applied for a land grant and received funds to purchase the property to use the property for a public boat launch in December 2014. Changes will soon be happening to the property which will also be adding a handicap accessible boat and kayak launch.

George and Amanda Hedden were the first to own the Old Mission Inn, then named "Hedden Hall", which operated as a 31-room hotel. George Hedden came to the area in 1866. Born in Palmyra, Wayne County, New York, on December 14, 1823, he came to Michigan when he was 10 years old and lived in Washtenaw County. He was one of 14 children, and one of the first students to attend the University of Michigan in Ann Arbor, where he was a law student. He later discontinued his studies due to an illness in his family.

Famous guests in Porter's Guestbook in 1936 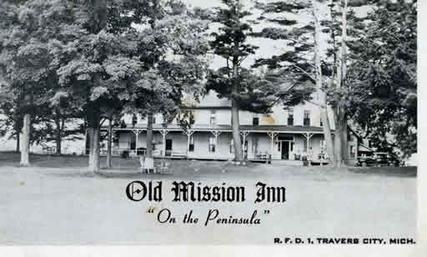 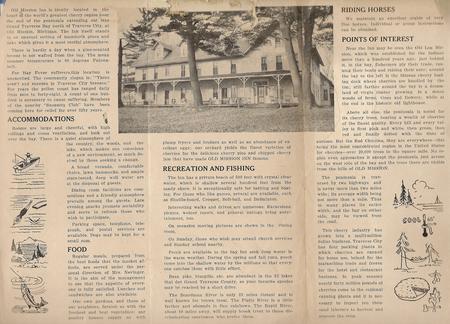 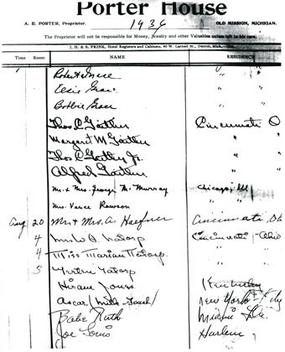 At the age of 24 he met Amanda Carpenter of York, Washtenaw County, Michigan. They wed, and six years later they had a daughter, Wilma, who later married Solomon Franklin. The couple also had a son named Fred. Who later moved to Los Angels.

While in Ionia County, Mr. Hedden organized the Farmer's Mutual Insurance Company, the first of its kind.

In the spring of 1866, he walked every step of the distance from Traverse City to Old Mission. He purchased a little farmhouse and moved it across the street, which is where the Inn stands today. He opened the Inn in 1869. Mr. Hedden was appointed as Postmaster in 1869 and continued for 20 years operating out of the Inn.

He donated the land where the Old Mission Congregational Church stands today, two doors away. He was actively involved in starting the first Grange movement and was a strong member of the Farmers and Fruit Growers Club. He was also the very first to engage in the summer resort business at Old Mission and on the Peninsula.

He ran the Inn until the death of his wife on February 6, 1900. He then sold the Inn to Alfred and Ella Porter in 1902. Mrs. Hedden died at the age of 72 from a non-disclosed illness, and Mr. Hedden died February 8, 1909 at age 85. It is believed that Amanda's mother, Lucinda Carpenter, was buried in the front yard. 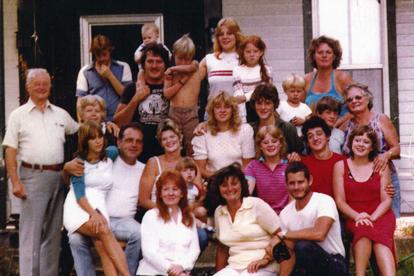